skip to main | skip to sidebar

It's a Jungle Out There

My husband, Maurice and I purchased twenty acres just below Makawao Town in 1986. It took a couple of years to decide what crop would be the most suitable to it's rugged terrain. We noticed the coffee, spindly and wildly out of control, but dismissed it as wild and "undrinkable" after trying it out one winter. We had picked it and painstakingly removed the outer cherry, then we dried it for a couple of days...more painstaking removal of the outer husk, then we baked it in the oven until it achieved a nice dark coffee color. The brew that resulted was so bad we couldn't even swallow it. Of course, we had broken every rule of coffee production except the picking, but we didn't know that then. 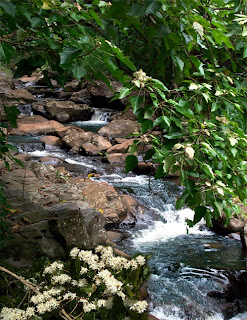 After researching vanilla as a crop (too labor intensive), cacao (no processing facility on the island), kava (unknown market) we were stumped. A crew of day laborers we had borrowed from C. Brewer/Wailuku Agribusiness exclaimed daily over the beauty and health of our coffee trees. They were from Guatemala and between our limited Spanish and their limited English we eventually got across to them how awful we felt our coffee tasted.

At their own expense they brought an agronamist from the Big Island over to inspect our trees. After a good laugh at our coffee processing attempts he agreed that our coffee looked more robust than any he had ever seen. We now had to pay attention.

Over the next several years we thinned, pruned and attempted to tame what was a wild, out-of-control jungle along the Maliko Stream.

Our first harvest had to be flown to the Big Island for processing since there was no facility here on Maui.

We finally got to taste our coffee after all the steps along the way had been conducted correctly. One wrong move, picked too green, too long a fermentation, not dried well enough, any of those things can ruin the taste. The roasting is just as important and we learned how a minute too long in the roaster can make a lot of difference.

I think we have it down to a science now and our coffee was ranked fifth in the state by Wilhem Boot when he was here at a cupping in 2007. His father Jacob Boot on a visit from Amsterdam where he owns a coffee museum, toured our farm in October of 2007. He identified our coffee as Bourbon. An old variety that's hardly seen any more. We asked him what he thought of our trees and our coffee and he said, "I wouldn't change a thing. You're doing it just right." 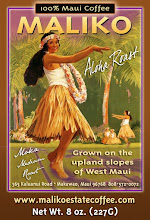 Come Stay in our Guest House 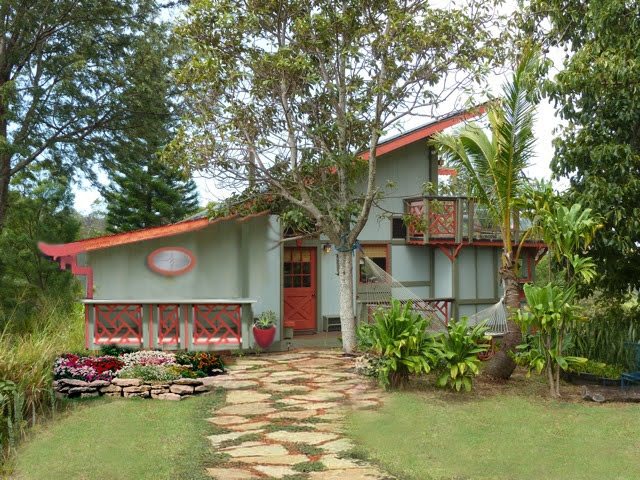 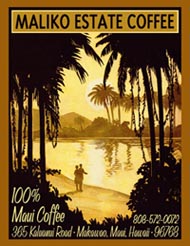 Actual freight costs plus $5.00 shipping and handling fee added to all orders. 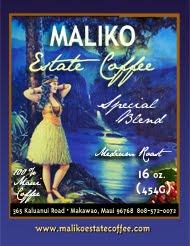 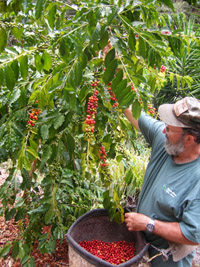 The Falls of Maliko